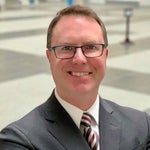 Attorney Quinlan has practiced law in Pennsylvania since 2001. He earned his J.D. at Widener University School of Law in Harrisburg, PA, and earned his B.A. at Bloomsburg University in Bloomsburg, PA.

He is a member of the Pennsylvania Bar. He also belongs to the Pennsylvania State Bar Association. Mr. Quinlan has guided hundreds of clients through both criminal and bankruptcy courts, resulting in acquittals and the discharge of hundreds of thousands of dollars of debt. Additionally, he has experience as a county and state prosecutor at government agencies, including the York County District Attorney's Office where he worked as a senior prosecuting attorney in the Crimes Against Children Unit. Attorney Quinlan also practiced in the Pennsylvania Governor's Office of General Counsel under two governors where he prosecuted on behalf of the Commonwealth's licensing boards in the Bureau of Professional and Occupational Affairs.

Attorney Quinlan coaches his son's basketball, soccer and little league baseball teams and proudly serves as a trustee to the Fredricksen Public Library.